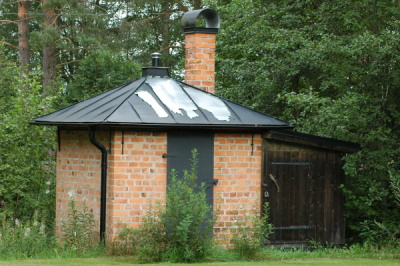 In the beginning of the 1900s the populace of Gagnef was, largely, self sufficient. Most things were produced by each household – only the most essential could be bought. Because of this they produced their own beverages. For this malt was needed, and this is where the oasthouse (Swedish: ”kölna”) comes into play. The malt was dried in an oasthouse.

An oasthouse association was formed

The year 1905, exakt date unknown, it was decided at a meeting to determine the rules governing Bodarne’s “Kölne Association”. The association was formed as a share company. In all 18 persons signed up for 53 shares, each worth 5 SEK for a sum of 265 SEK. Dividends were decided on a regular basis. The 9h of May 1931, for exemple, it was decided to pay out 1:50 SEK before control of the associations cash was handed over to the next administrator. Something to think about in today’s society.

The oasthouse building is situated immediately south of the present Midsummer celebration site,
built on a slope heading down towards the river Västerdalälven. Made of bricks, about 3×3.5 meters square and about 3.5 meters high. At the bottom of one side a cast iron stove is immured. About one meter above the building floor there is a fine iron mesh, upon which the malt was placed to dry out. Under the mesh there is a cast room, and it was in here the heat used for drying was regulated by heating the cast iron stove. A couple of smaller valves are included in the room. Above the grid is a door, and from there were controlled drying process.

The malt was made from rye, that was soaked in custom made large trays of wood. The rye was ripe for drying when sprouts had grown in sufficient quantity and size. It took about a week of soaking until the rye was ready to be dried in the kiln. The drying process took up to three days, and as a rule an older woman took care of it all. The drying process was also monitored by continuous stirring. The first twenty four hours were important, during which stirring was carried out at least once an hour. The malt tasted sweet and good, and the oasthouse was a favorite hangout for the village children, since sweets at the time was a scarce commodity.

The oashouse association’s rules were approved in 1906, but the first meeting is dated January 8, 1913, wherefore one can assume that the kiln wasn’t used until then. The last documented meeting is dated April 29, 1949. A decision on closure is not listed. The business has ceased, without any formal decision.