At the end of the 19th century an idea about using ferries to efficiently cross the Väster Dal river was born. The need for such a crossing had probably existed for a long time, but the technology had been missing. Now, the iron and timber production industry had been modernised. The so called “large shift” (Swe: storskiftet) had resulted in
forest plots being scattered across the parish of Gagnef, which together with transhumance and fragmented land ownership had brought with it an increasing need to cross the river.

The birth of a ferry cottage

In proceedings dated the 14th of April 1873, the decision is made that money from the Ferry Company should be used for “larger ferries of such a nature that both beast and man can cross without trouble”. It is further decided that a ferry cottage shall be erected at the ferry crossing. Bodarna villagers and anyone else, that has lands on both sides of the river, shall construct it. The villages of Mjelgen, Näset, Djurås, and parts of Gröntuv and Skogen shall participate.

Unclear when the ferry was first used

1876 the decision was made to build a barge “like that of the Helsingsta ferry”, to which 150 kronor was allocated. There is no record of the exact date when the ferry was first used, but it was probably around 1880. Up until the 13th of May 1901 there are no regular proceedings. From then, regular proceedings were kept up until the 22th of April 1929. At that point in time, it was decided that all the funds of the operation were be kept in the bank under the name Åkerängsta Ferry Company. At the same time the ownership of and responsibility for the enterprise was transfered to the local Road Region. In 1901 there was one rowing boat available at the crossing. A second row boat was added in 1906, which had to be payed with money from the repairments fund. Over they years, further row boats were added. 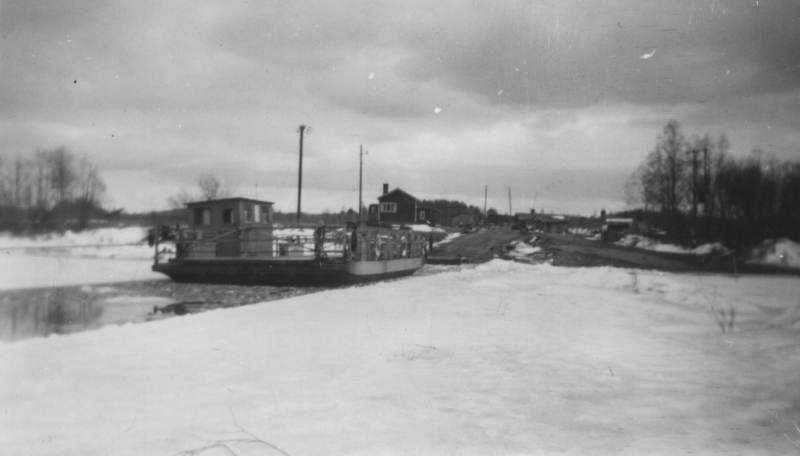 The ferry man was hired on a seasonal basis, more precisely from spring thaw until the river’s late autumn ice was strong enough to enable crossing. His pay was set forth in a contract, in which not only payment was decided but also the ferry man’s obligations. In proceedings dated the 5th of April, it was decided that the ferry man’s payment should be increased by “a peck of oats and a peck of rye or 75 öre (1 öre = 1/100th of SEK) for farmers and the ferry man would be obligated to assume his duty on the 24th of April, and for any work done before that time he would be paid half a fee, 1 öre per person, 5 öre per load.”.

Examples of ferry crossing fees, decided upon at a meeting the 5th of April 1919:
For an outsider, single person: 5 öre.
For an outsider, with bicycle: 5 öre.
On horseback: 10 öre.
Horse with carriage, 1 person: 15 öre.
All other passengers: 5 öre.
Motorcycle, 1 person: 25 öre.
Automobile, 1 person: 100 öre.
For partners in the ferry company, no fee has even been recorded.

In 1922 a new sheet metal barge was bought at an auction in Forshuvud. The Mellsta Bridge had made the Forshuvud ferry crossing redudant. The barge was brought to Åkerängsta by horse without any problems along the way.

After the end of WW2, the ferry at Åkerängsta was finally equipped with an engine, which made the crossing easier and quicker. On more crossing was established within Bodarna, right below the Djurforsen. The older Åkerängsta ferry was put to use there and facilitated a lesser used river between Bodarna and Svedjan. This newer crossing was however unmanned, wherefore getting to the other side or not, was a matter of the ferry being at one’s side of the river.

During the active years of the Åkerängsta ferry crossing, the ferry company paid out some reimbursements for problems caused by timber fallen in the river. It was also awarded some reimbursements from the Stora Kopparberg Mining Company for nuisance caused by the impoundment at Forshuvud Power Station. The ferry operation at Åkerängsta continued until 1960, when the new bridge was inaugurated and an important era in the river’s history came to an end.

People, animals and vehicles in the drink

Over the years, there have been some accidents. In the early 1930s a lorry went through the ice around christmas time. The successfull recovery attempt was followed by scores of people. At a later occassion, a car transporting timber drove in the river, forcing the three occupants (one child) to swim ashore. Several horse driven carriages have also ended up in the river. One time, a horse carriage attached to a mower backed down into the river, drowning the horse. Another time, a horse stampeded down the northern descent and ran straight into the river, which drowned the horse, but the rider managed to swim ashore.

Only one fatal accident involving a human has been recorded. It occured in the early 1950s, when the ramp had been equipped with booms, that were raised when the stepping unto the ferry was allowed. A carriage loaded with bags of flour was heading down the slope on the northern side of the river when suddenly the [bukjord] in the horse’s harness broke, displacing the whole load unto the horse’s hind legs, whereupon the horse stampeded straight through the booms and down into the river. This time, the horse was rescued, but the driver perished. Wether he was hit fatally by the boom or simply drowned, is unknown.

The ferry men, having served the crossing all these years, are worth a chapter of their own. Many anecdotes about them deserve to be preserved for generations to come. Here follows one such story:
It happened a summer day, sometime in the 1950s. The river was full of timber and the ferry was manned by two ferry men. In order to clear the ferry’s path of timber when crossing, a hefty wodden beam was suspended down in front of the ferry. Hanging on to this beam, one could move timber of out the way. At this occassion, Erks Viktor was moving timber and his collegue Finn Oskar was steering the ferry. Erks, however, was suddenly to light and the pressure against the floting timber to great, whereupon Viktor flew in an arc straight into the water. Finn Oskar halted the barge and retrived his partner with a boat hook. The general consesus, following this incident, was that something unique had occured – never before had Finn Oskar been seen laughing and never before had Erks Viktor been seen taking a bath!

Yet another ferry crossing

In all likelyhood the first ferry at Åkerängsta was operated by oars. This has been documented by the donation of a couple of oars to the Gagnef Memorial Cottage when the Road Commision took over operations in 1929. Yet another ferry crossing has probably been used about one mile south of the joining of the rivers. Certain maps show a descent down to a crossing. This crossing was most likely also operated by oars.