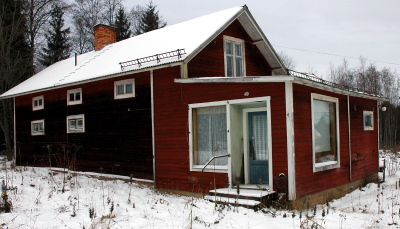 There had always been a general store in Boan (the local name for Bodarna) – A. G. Swahn’s general store. Long since closed, it was a typical example of its kind. A barrel of herring right next to the entrance, horse shoes, sugar in the form of sugar-loafs (cut using specialised pliers). And coffee, in the form of rosted beans, to be ground back home in a equally specialised grinder.

Many of the goods available were sold by the item. The weight was determined using a so called balance scale, with a weight on one side and the goods on the other. Payment was often in kind. Many farmers raised chickens, and payed with eggs. It should be noted that each farmer was largely self sufficient. Payment in cash was kept to a minimum.

The prices were very unlike today’s prices. A taffy, for example, cost about 1 öre (1/100th of a swedish krona). Summations of payments were made using pen, paper and manual addition by the store clerk. It was often possible to add what was owned to one’s credit, since the customer base was well known and homogenous.

In summary, the general store was a idyllic and peaceful place, pretty far removed from the stress of modern times – evidenced in the fact that it was closed on sundays and holidays.