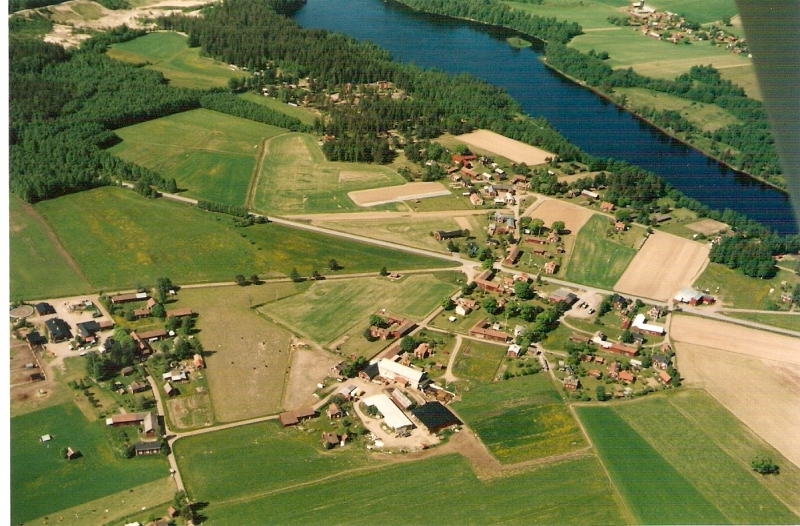 Bodarna village is situated in Gagnef municipality, south of the small town Djurås, and is the last village along
the Västerdal River (Swedish: Västerdalälven) before it joins the Österdal River, forming the Dal River (Swedish: Dalälven). Other adjancent villages are Arvslindan to the east and Björka to the west. Across the Västerdal River lies Svedjan. South of Bodarna there is mostly forests, but also transhumance holdings that were once linked to the village.

The population amounted to 106 persons in the Statistics Sweden’s (swedish: Statistiska centralbyrån, SCB) latest census (2010), on total of 27 hectares. Statistics Sweden (SCB) considers Myrheden, a part of Bodarna, to be a separate village. In Myrheden, which is 22 hectares, there lived 86 persons at the end of 2010. Thus, the real
population size of Bodarna is 192 persons.

Used to be called Bodarne (with an e)

The first recorded census date back to 1726. At that time, however, the village was called Bodarne, named after a collection of sheds (swedish: bod, pl. bodar) by the edge of the Västerdal River. The present name, Bodarna, was adopted when the Royal Institute of Surveying Board in 1967 decided to replace the e for an a. Concering the reason
why, sources say that “(…) the Ordnance Survey has requested, that the board must fix the orthography and spelling for the names of a number of [jordregisterenheter] in the county of Kopparberg (…)”. The same
change was implemented for a number other Bodarne, among other places in Bjursås.

Famous for its midsummer celebrations

Up until mid 20th century, Bodarna was very much selfsustaining and a distinctive agricultural district. Some residents are still engaged in agriculture, altough for commercial reasons as apart from self-sufficiency. Bodarna is famous for its midsummer celebrations, which by tradition are held on the midsummer day.

To contact the village, send an email to info@bodarne.se.